I had this image stamped and coloured for some time, it is a rather large image and needed the right sketch to make a reasonable sized card. I made the medallion with 6 punched scallops and I folded them teabag style to give the dimension. For my layout I used Sweet Sunday Sketch SSSC132. 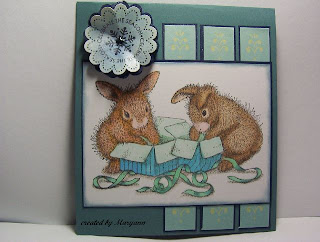 Posted by Maryann at 2:37 AM No comments:

I created this card using Paper Pretties stamp set. It has a some really nice verses that you could use for any occasion. I stamped the boy and coloured him with copics, cut him out fee hand and sponged the edges for a softer effect. The panel to the left was punched with the ticket punch both were then layered onto black card. The medalion was created with a 5cm x 5cm square with punched corners the corners were then flipped out to show the edges, it was then topped with the the punched circle again I softened the edges with ink. The designer paper was a bit left over in my scrap pile, brads were then added to complete the card. 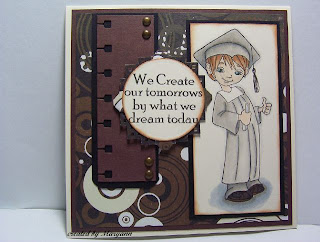 Inspiration for this card

Posted by Maryann at 1:25 AM No comments:

Today I inked up La la Land stamps Chef Marci, they have just the cutiest range of stamps. This is the first time I have used the mini rolled rose die from MFT, I love the look but it is a bit fiddly getting the roll right, I think a bit more practise is needed. 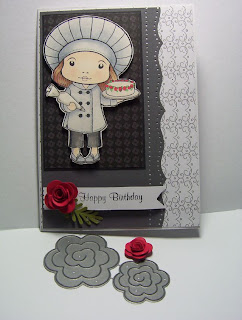 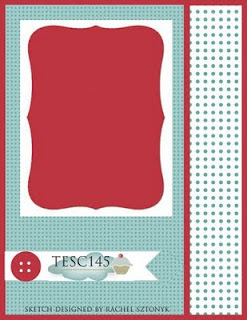 and Our Creative Corner Colour challenge for my inspiration. 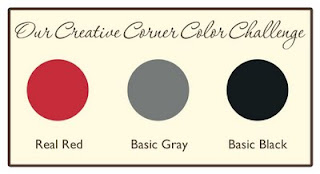 Have a great day

I had this image coloured and sitting on my desk, just waiting for the right moment to use it. It was a bit of a long time to wait for Easter card. So I it would make a rather cute baby card you never know when you will need one of those. I had the brown and blue card still out from the other day they match so well together. 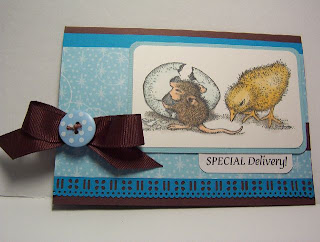 Posted by Maryann at 1:58 PM No comments:

A Clean and simple baby boy card with this cute designer paper and lovely ribbon. 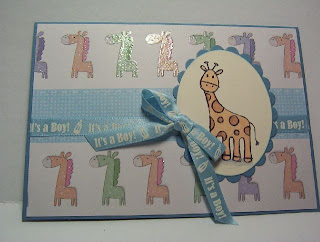 Posted by Maryann at 2:17 PM No comments:

This lovely Stamp is from a get well set from Kanban, I haven't added a sentiment because I am not sure if I will use it as a get well or a birthday card. I have coloured the white flowers & ribbon with my copics to match the colours I have used for the dress. 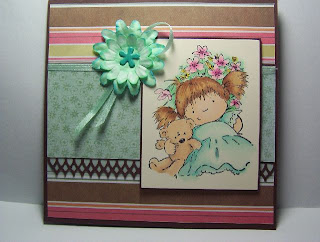 Posted by Maryann at 8:32 AM No comments:

Have a great day

Today card is clean and simple, some days you just need a quick card. Winter is nearly over but over the past week we have felt the strong windy days and today I just needed some bright colours, roll on spring. 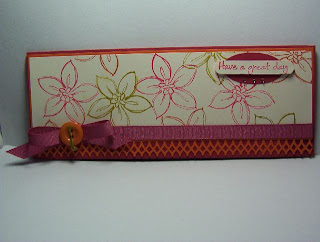 Posted by Maryann at 4:16 AM No comments:

The idea for this card came last month when I had to choose a theme for the COTM on
Boomerang Stampers List. I found this tutorial link for cracked glass on splitcoast stampers Beate does the most amazing tutorials. I did this technique many years ago so it was great to refresh my memmory. I don't use my embossing folders often enough and never with ink, but I really like the effect so I just have to try it again. 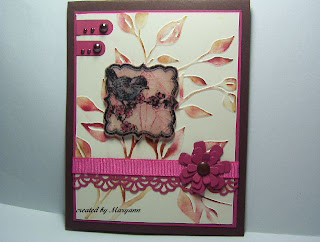 Posted by Maryann at 2:42 PM No comments:

Email ThisBlogThis!Share to TwitterShare to FacebookShare to Pinterest
Labels: cuttlebug

It is a cold and cloudy day today and feeling every inch a winters day. A perfect day to make a winter card. This is my first Christmas card for this year,( I usually make my cards at the last minute and very clean and simple), even though it is hot here at Christmas time snowflakes are still a great decoration to use. I have combined Mojo Monday mojo205 and Paper Pretties PPMC05 Challenges. I stamped my image with black brillance ink and coloured it with copics, I am getting the hang of colouring with these pens. I then used the nestabilites oval die and sponged the edges. I wanted to add some pleated ribbon but it wouldn't stay down with just tape so out came the sewing machine. I can tell I had to dust off the cobwebs as I have not used it for years, but it worked perfectly. I love chocolate and blue colour theme and would never have thought to use it in a Christmas card, I usually stick with more traditional colours. 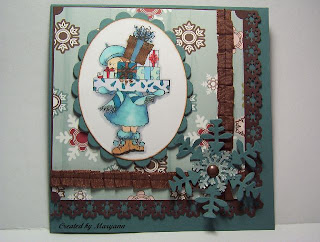 This card was for July COTM theme techniques on BSL. I have used a stencil to create the faux mosaic tile. Dry emboss some card and while the stencil frame is held in place, stamp and colour your image, then using a versamark ink pad and thick embossing powder, emboss it and once it has cooled take off the stencil and walla a beautiful faux tile for you card. 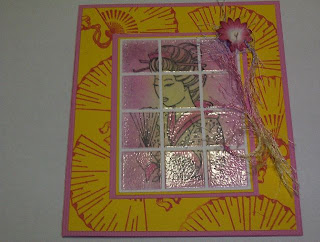 Posted by Maryann at 3:21 PM No comments:

I have totally lost my mojo over the last month, but lately I have been working on some things. So I thought I would forget about the month a do a bit of catching up. Last month I met up with my husband for some R & R at the beach, he had his fishing rods so he was all set. I hastily packed my stuff after work and thought this is great while he is fishing I would get some images done for later projects. There is only so much room in the caravan, so I can't take a lot of craft items, so I had planned to use a few stamp sets and do lots of colouring. I was totally shocked to find I had left my bag of copic pens on the craft table, so all I had to work with was the stamps , a whole week of stamping the same images was not that inspiring. 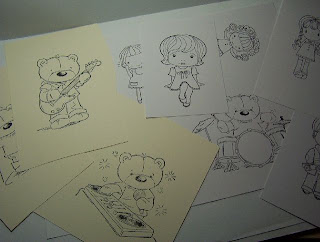 But stashed away in the cupboards were some 3D sheets that I had picked up from crafts stores just in case it was raining. So it was a week of a bit of stamping, lots of cutting and layering but no colouring. In the end I have some lovely Accents to put on handmade cards for the occasions I need a card for some-one who is not a stamper. 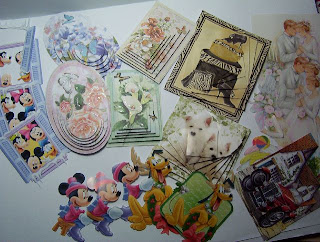 Posted by Maryann at 2:22 PM No comments:

Maryann
Hi, I am a card maker from Australia. I was introduced to cardmaking in 1999. I find it a very good outlet for some creativity and you can meet some life long friends. My other passion is playing golf which I play several times a week. Sometimes it is hard to choose between playing golf and card making.