Today on the CCEE Stampers blog the Design team are sharing their cards with Penguins.

It's Penguin Awareness Day.  Put a penguin or two on your card.

I made this step fold card with my scoring board. The base card folds flat for postage, the front panel is sized to suit the stamp that I have used. I dug through my supplies for a penguin stamp and found this clear stamp from Stampavie. It is never to early to start you stash of Christmas cards. I am not sure if  the stamp set is still available somewhere. The sentiments and banner die is from Lawn Fawn. 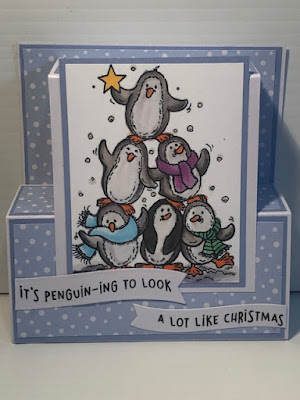 Don't forget to check out the CCEE Stampers blog to see the rest of the creations the CCEE Stampers have created this week. You can also see more details of their creations on their individual blogs.
Liz Williams
Lois Bak
Lynn McAuley
Frances Byrne
Kelly Santi
Maryann Einam- You are here
Thanks for stopping by....
Posted by Ironlady at 8:00 AM 1 comment:

It is time for the first challenge of the new year with the design team on CCEE Stampers blog.

It’s a brand-new year.  Use something brand-new or something you’ve never used before, on your card.  It could be a stamp, a die, or even a technique.

I made this card for a special occasion, next month will be celebrating an new life into our family, our first grandchild. 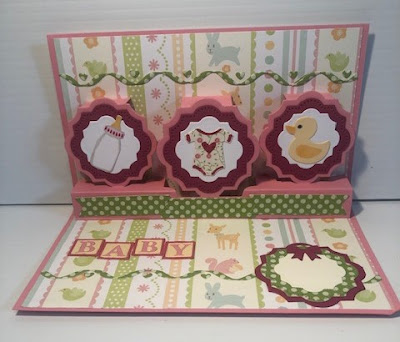 I made the inside of this card with the Karen Burniston's  1183 - Little Labels pop-up die set. and the 1086 - Baby Charms set. I also used the 1186- Boarder blends - trims 1184 - Labels - Crosshatch for decoration.
On the front of the card I included some die cut elements with designer paper background. 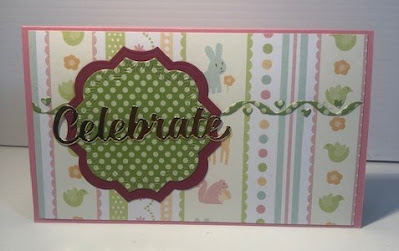 Don't forget to check out the CCEE Stampers blog to see the rest of the creations the CCEE Stampers have created this week. You can also see more details of their creations on their individual blogs.
Liz Williams
Lois Bak
Lynn McAuley
Frances Byrne
Kelly Santi
Maryann Einam- You are here
Thanks for stopping by....

Christmas around the world

Welcome to the last challenge of the year with the design team on CCEE Stampers blog.

Hostess Lynn would like for all those who are taking part in this challenge to select a country or culture other than their own and feature on the front of their cards a unique element or tradition from that country or culture's holiday celebrations!

I grew up with this tradition, we had these cute little boots that we put out each year, we didn't have a fireplace so the boots were just left outside our bedroom door. As a child it was just something that we did, I didn't realize that it was something my parents grew up with also until I googled the meaning of St Nicholas day. I thought I would share with you some of the meanings that I found.

What is St. Nicholas Day?

St. Nicholas derived from Nicholas of Myra and was a bishop in 4th century Greece. He was known for selling off his own items and then giving the money to the poor. He would commonly leave coins in people’s shoes and dedicated his entire life to serving people who were sick and suffering. This is how he gained his saint status, and is what inspired St. Nicholas Day (also commonly known as Feast Day or the Feast of St. Nicholas).

St. Nicholas Day is celebrated on December 6th every year. This date was chosen to commemorate the day of St. Nicholas’s death and to celebrate his life and generous spirit.

Typically celebrated by leaving small surprise gifts in shoes or stockings, the day is meant to honor the generous spirit of Saint Nicholas, the historical inspiration for our contemporary version of Santa Claus!

Because Nicholas of Myra was a saint in the Catholic church, St. Nicholas Day is primarily a Christian holiday. It is especially popular among European Catholic and German Lutheran populations.

As time passed St. Nicholas Day began in different ways. In Italy, this day was celebrated with feasts, gift-giving, and festivals. In other European countries like Germany and the Netherlands, children would leave their shoes or special St. Nicholas boot in front of the fireplace or front door at night and find presents in them in the morning. The history of St. Nicholas and his good deeds was part of the inspiration of the modern-day Santa Claus and Father Christmas, which is why there are some current traditions of leaving gifts in people’s boots or shoes (or stockings) 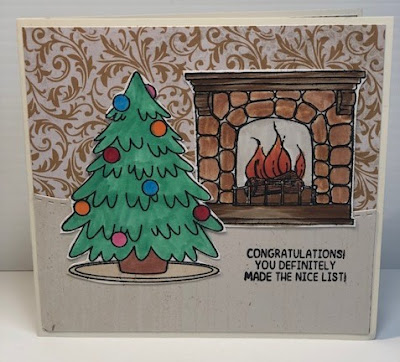 I made the front of the using stamps and inside I made a pop up using Karen Burniston's Flower Pivot Panels and decorated it with the stocking charms. 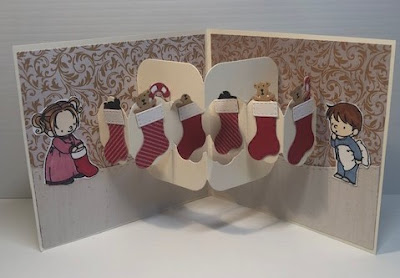 Posted by Ironlady at 8:00 AM No comments: 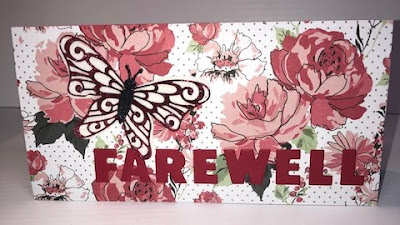 On the inside I made a pop up using the die and the designer paper was so suitable with the large print and then a good sized area for all the work collogues to sign in. 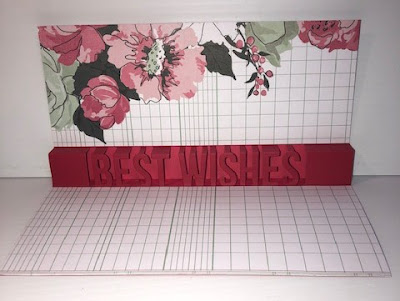 I thought I would share the card I made for my daughter's birthday.

I recently picked up this Sizzix die set on sale and I liked the idea of the thin frames to showcase the sentiment verse that came out of a designer paper pack. I made the flowers and leaves with some coordinating card stock and papers. 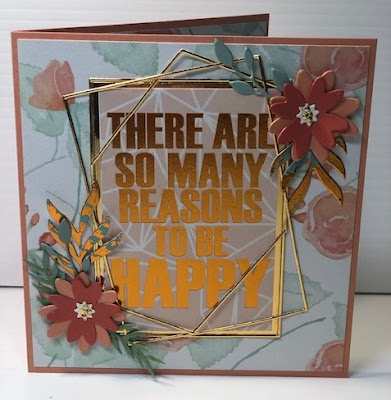 For the inside of the card I have used Karen Burniston 1122 Paper Frames Pop up die set. 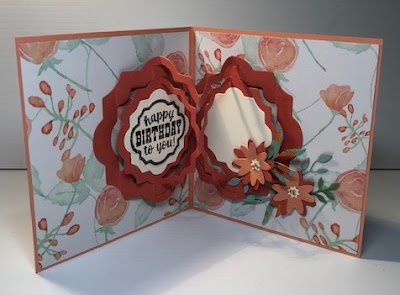 My card today is made for the last C4C challenge for 2021.

As always we look back to the past year of sketches, I chose the sketch from June C4C589. 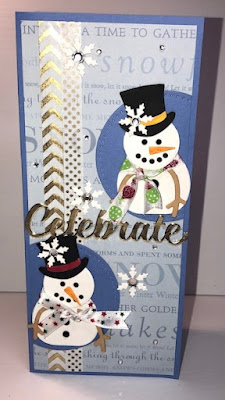 I have used Karen Burniston 1017 - Snowman and 1067 - Celebrate for the front of the card, I also used washi tape for the stripes. Inside the card I added another snowman and some falling snow made from the pieces that fell out of the face die. 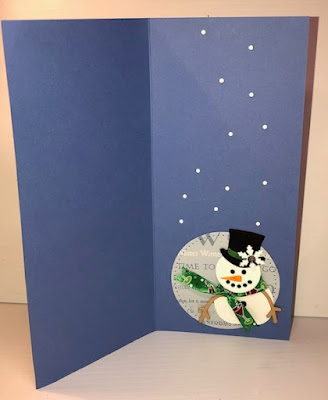 Don't forget to check out the rest of the “Crazies” cards over on the Crazy 4 Challenges blog and also their individual blogs for more details.
Frances Byrne
Rebecca Endie
Karen Ostergard
Lois Bak
Nikky Foden
Maryann Einam- You are here
Thanks for stopping by today....
Posted by Ironlady at 8:00 AM No comments:

This week on CCEE Stampers blog we have been asked to share a family Christmas Traditions.

Lynn says if your family is like mine, there are certain family traditions that show up at each of your Christmas celebrations together. I am challenging each of the CCEE Stampers and their fans to create a holiday card which depicts on the front of his/her design a favorite or an unusual Christmas tradition shared by family members each and every year.

I don't think ours is that unusual and I guess it is not something that we have done regularly since the girls have grown, but having one with a December birthday her request was always to go out and see the Christmas lights around the neighbor hood.

I remember one year especially when one street really got into the spirit and they closed the street so you had to go out and walk to see the lights. One house had a live Santa Claus that you could go and see and ask for your Christmas wish. This was a special Santa as he knew my Daughter's name and that it was her birthday, the look on the then 5 year old face was priceless. ( I only found out the next day that he was really one of the dads at her pre-school) 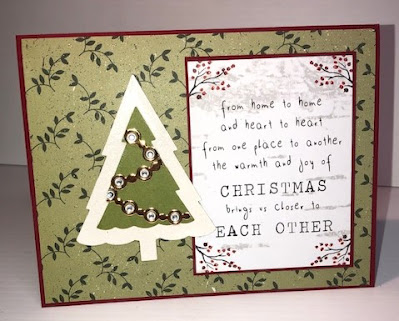 I had this designer paper pack in my supplies and I really liked this sentiment. I added a Christmas tree to the front along with some gem stones. 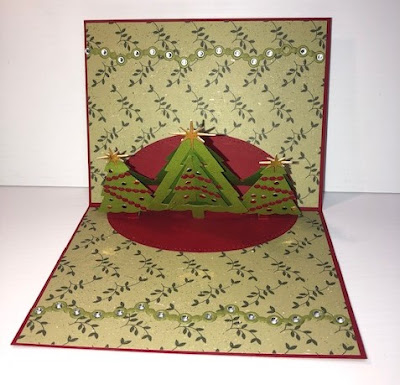 On the inside I have used Karen Burniston's Christmas trees pop stand. I have also added a large oval as a tree skirt and some border blend party dies, gem stones and dot stickers. 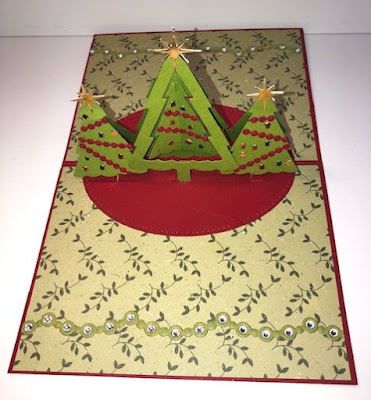 Don't forget to check out the CCEE Stampers blog to see the rest of the creations the CCEE Stampers have created this week. You can also see more details of their creations on their individual blogs.
Liz Williams
Lois Bak
Lynn McAuley
Frances Byrne
Kelly Santi
Maryann Einam- You are here
Thanks for stopping by.... 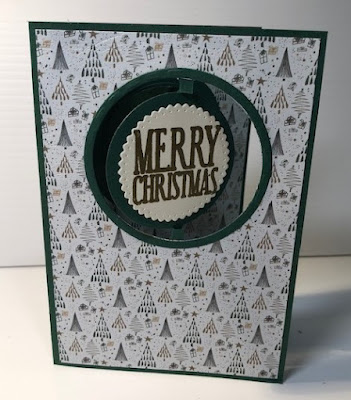 This time I have used the tree charm from the winter charms set. 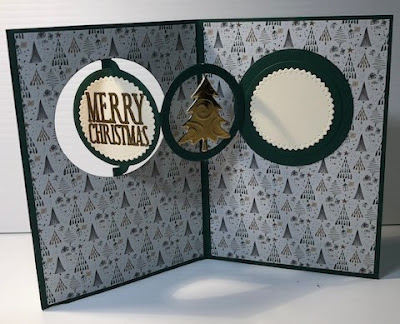 Thanks for looking...
Posted by Ironlady at 8:51 PM No comments:

Hi Crafting Friends,
Today I am sharing another Christmas card this one was made with Karen Burniston's Circle charm pop up die. 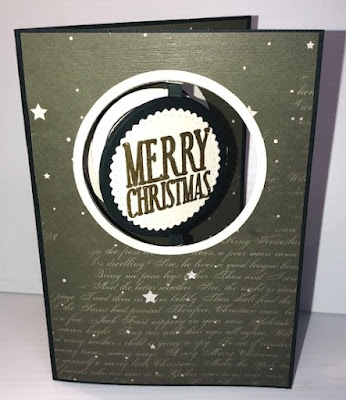 The sentiment is heat embossed in gold before die cutting. 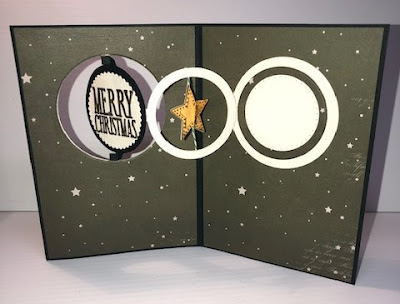 Posted by Ironlady at 8:32 PM No comments:

Hi Crafting friends,
The other day I created a background with the Tim Holtz stencil and distress oxide inks, I had so much fun and it turn out great so I made some more. I have used the same inks for each card just adding a bit more pressure as I applied the ink on one. 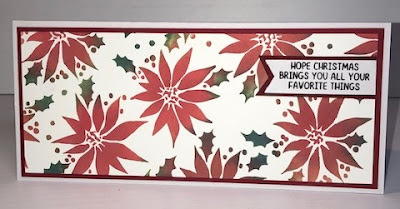 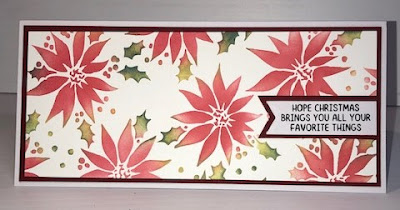 Ironlady
Hi, I am a card maker from Australia. I was introduced to cardmaking in 1999. I find it a very good outlet for some creativity and you can meet some life long friends. My other passion is playing golf which I play several times a week. Sometimes it is hard to choose between playing golf and card making.